Everyone feels anxious every once in a while because it is a normal human emotion.

We may experience nervous feelings when we are faced with a problem and have to make an important decision, are called in to see the boss, or even preparing to go out on a first date. Many people mistakenly refer their nervousness as 'anxiety' and they generalise their emotions into one description ...  'feeling anxious'. 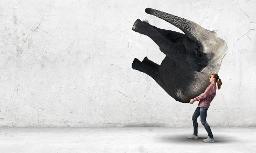 When you remove the huge 'elephant' in your life, it can no longer hold you hostage.

However, anxiety disorders are different from normal everyday anxiety because it can cause someone distress to a level whereby it interferes with one's ability to lead a normal life. These people often find themselves being in a constant state of worry and fear. It often feels overwhelming, and can be disabling on many levels in their lives. This can strain on relationships and therefore create even more distress.

For ease of understanding, the explanation for anxiety has been simplified onto a scale of intensity, to include the more common complaints - from feelings of fear, nervousness, panic, phobia, anxiety, to diagnosed disorders as specified in the psychological Diagnostic and Statistical Manual of Mental Disorders, Fifth Edition (DSM-5).

Each level is unique and separate within itself, presenting with its own set of problematic symptoms. The intensity of the feelings determines what level of anxiousness one is experiencing.

Below is a list of several expressions of anxiety. By identifying with the correct term of what one is feeling, it is easier to deal with the emotions surrounding the experience.

Fear is a natural human response to the presence of threat of danger, pain or harm. When a dog jumps in front of us and barks aggressively, there is a possibility that the dog may attack, and a valid response is fear. If we see a snake where it is not expected (ie outside a cage), then fear may kick in to make sure that we are alert and attentive as a precaution for our safety. Therefore, fear is very useful in the right circumstances.  When feelings of fear occurs constantly about something without any real threat, then its intensity has developed it into a phobia.

Nervousness is a feeling that often occurs when one is unsure of what to expect or what the outcome may be. While preparing for a job interview, people often feel nervous.  When going out on a first date, it is natural to feel nervous. Therefore, nervousness is on the lower scale of anxiety although many people will refer to being anxious when in fact it is excitement paired with nervousness. A person feels nervous when one is worried and afraid about what might happen ie. if you break your mother's favourite vase handed down from her granma, it is perfectly understandable for you to be nervous.

Panic can set in sudden with uncontrollable fear or anxiety, often causing wildly unthinking behaviour. It is usually in response to an immediate event. However, once the trigger that set the panic off has resolved, the person can return to a state of calm relatively quickly. ie. a mother can feel panic if her child does not show up at their agreed meeting place after school and she may call the school, her child's friends etc to find out where her child could be. If her attempts of getting through to find out where her child is fails, then her fears and worry can escalate to panic. However, the moment she finds her child, the panic will subside and everything can slowly settle back into calmness.

Panic attack is a condition whereby someone experiences feelings of terror that strike suddenly and repeatedly with no warning.  People often describe their panic attacks as being similar to having a heart attack or "going crazy." Other symptoms of panic attacks include excessive sweating, chest pain, palpitations (unusually strong or irregular heartbeats), and a feeling of choking or difficulty breathing.

Social anxiety disorder  Also called social phobia, this involves overwhelming worry and self-consciousness about everyday social situations. The worry often centers on a fear of being judged by others, or behaving in a way that might cause embarrassment or lead to ridicule.

Specific phobias  These are intense fears of a specific object or situation, such as heights or flying. The level of fear is usually inappropriate to the situation and may cause you to avoid common, everyday situations.

Generalized anxiety disorder  This is excessive, unrealistic worry and tension, even if there's little or nothing to provoke the anxiety. Anxiety disorders are different from normal everyday anxiety because it can cause someone distress to a level whereby it interferes with one's ability to lead a normal life. These people often find themselves being in a constant state of worry and fear. It often feels overwhelming, and can be disabling on many levels in their lives. This can strain on relationships and therefore create even more distress.

The exact cause of anxiety disorders is currently still unclear however, scientists continue their research on mental illness and their findings suggest that these types disorders arise because of a combination of factors, including genetic dispositions, changes in the brain and environmental stress, rather than just one factor.

Some of the general symptoms for anxiety include:

"I came to Pollins work at a very difficult time in my life, where traditional therapies were not working.  My sessions with Pollin really helped to bring clarity to what was a very confusing time.

Pollin has unique wisdom and understanding that I have not found in other therapies.  She is holistic in her approach, encompassing and working with all aspects of the human experience to work towards a more integrated 'self'.  I did not realise how much I had 'shut down' sections of myself; disassociated, just to survive.  This was illuminating, and very healing to learn to re-integrate myself.

My sessions were done either online/phone/video and actually found this to be very effective.  Pollins followup is 'next level' and I found this is what helped me move forwards.

I would gladly refer anyone to Pollin, she is consistent, trustworthy and very patient.  Thank you, I truly feel you have given me a kick start on my journey."

You Can ... Reclaim your power and fly.
NOTE:  It is very important to note that if you are on medication that has been prescribed by your doctor, that you maintain the dosage as recommended. Do not change anything unless you have discussed your intentions with your doctor. Pollin will be happy to work with you, in collaboration with your doctor to assist you towards your goal of wellness. If you have been diagnosed with a mental illness, it is important that you consult with your doctor and ask to be referred so that Pollin can work with your doctor to help you decide which is the next best course of action. Sometimes,  you may be referred to another professional service before she can start working with you at a later date.

Privacy Policy  In accordance with the Privacy Act 1993, all personal details have been omitted or changed to protect client identities and privacy. Names used are not associated with the real persons in anyway.  The case scenarios given here are meant as examples of the areas that hypnotherapy can help in and how.  The case scenarios are outlined to indicate the extent in which different cases can benefit from therapy in its own way.  The examples are only brief to maintain safety for all involved.  If any scenario has affected you in any way, please contact Pollin Kamell as per “Contact’ page.

Copyright  © Copyright 2005-2020 Pollin K Kamell.  All Rights Reserved.  This content may only be copied in part or in full, with copyright, contact, creation and information intact, with permission from Pollin Kamell..  If any other use is desired, permission in writing is required from Pollin Kamell herself. All images are fully copyrighted and are attributed to their respective artists as attained through 123rf.com, fotolia.com, dreamstime.com, dollarphotoclub.com and istock. No images shall be downloaded and/or reused in printed or digital format.

Disclaimer:  The entire contents of this website are based upon the opinions of Pollin Kamell, unless otherwise noted.  Individual articles are based on opinions of the respective author, who retains copyright as marked.  The information on this website is not intended to replace a one-on-one relationship or consultation with a qualified health care professional and is not intended as medical advice.  It is intended as a sharing of knowledge and information from the research and experiences of Pollin Kamell and her community.  Pollin Kamell encourages you to make your own health care decisions based upon your research and in-depth consultation with your qualified health care professional.