Many facets of CHIT

CHIT is a word that has many meanings. Depending on what level of consciousness development you are at, it presents differently in your life circumstances because the same kind of chit can be expressed differently.

The types of chit you have in your life is indicative of your level of consciousness in life. The many facets that chit can exist in our lives, makes it difficult to define chit concisely but for the purpose of simplicity ...

CHIT is the conditioned habitual programming that runs and determines the direction and expression of your life. It consists of different elements:

If asked to explain 'chit' in a nutshell for most people seeking therapy, it could be described as 'problems', 'struggles' or 'issues' that people face in life. In essence, CHIT could be seen as the core of life problems. Chit is anything that runs. in our system (mental, emotional, physical or spiritual) that is not in alignment or consistent with who we are today.

Examples of how CHIT could be expressed in your life 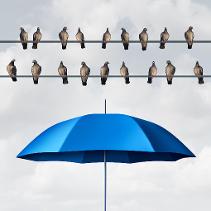 When CHIT is present in your life, you will often feel just like this umbrella here.

At the lowest level of chit, it appears in our lives like the bird droppings as depicted in the imagery  here. Like a newly washed car, parked innocently under a large tree or a row of power lines, the birds somehow find its reflection helpful in releasing its droppings with precision at the most visual parts of the windscreen, hence affecting our ability to see clearly through problems presented in life.

At the highest level of chit, it represents pure consciousness. One that allows you to live life to its fullest as your authentic self free of obligations and unnecessary struggle. Here , you will be an expression of your Selfness.